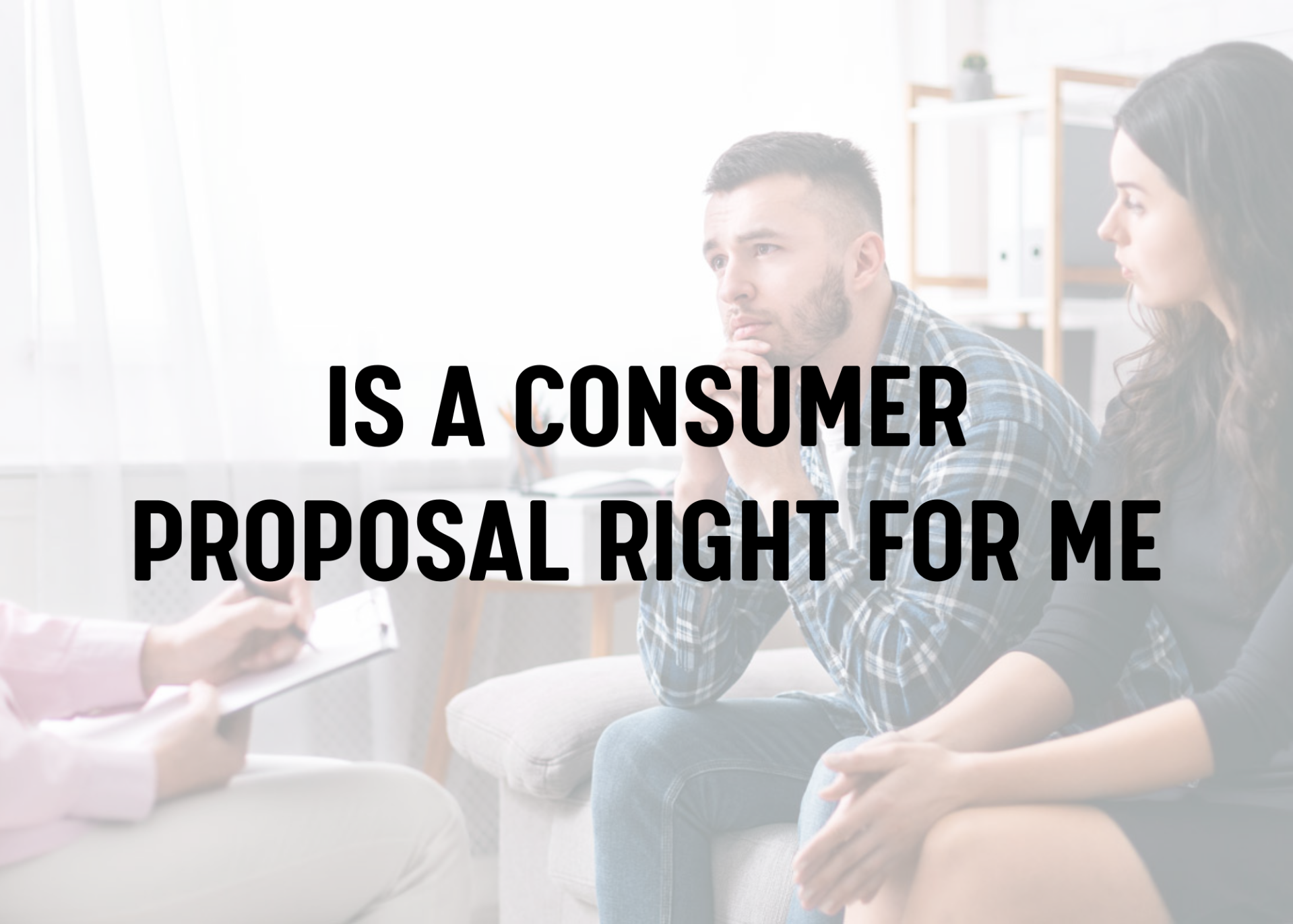 Is A Consumer Proposal Right For Me

In a sea of debt options, many are drawn to the notion of credit counselling especially if they need help managing finances. But in Canada, don’t be fooled. Most credit counselling companies do what’s called “debt management programs”. Their focus is not on providing consistent monthly budgeting advice but rather making a payment plan to creditors and essentially consolidating payments with reduced interest. You pay the company each month and they take a cut of the payment for their costs and the balance is sent to the creditors. There is no law to bind the creditors to this deal and they can opt out and still pursue legal action at any time.

A consumer proposal, on the other hand, is a different beast. It’s an arrangement to pay your creditors a different way then you agreed or pay only a portion of the debt while the rest is written off. The proposal is administered under Federal Bankruptcy & Insolvency Act but is not a bankruptcy. The law tells the creditors, Licensed Insolvency Trustee (“LIT”) and the consumer debtor what are everyone’s duties and responsibilities. We all play a part in the process.

With the professional assistance of a LIT, a legal deal to your creditors is created.  The day the proposal is e-filed with the Government, interest stops, judgements stop, wage garnishments stop and all previous arrangements with creditors cease. The exception are secured debts such as car loans and mortgages if you wish to continue those arrangements.

If you are concerned that you might lose assets in a proposal such as your home, car, or investments, don’t be. The only way the assets play a part is in determining what kind of deal to give the creditors. You may choose to keep all your assets and not have them form part of the proposal.

In most circumstances, those that file a proposal have steady income but are finding it increasingly difficult to make the monthly payments demanded by creditors due to revolving interest charges. They understand the obligation to pay their debts but simply can’t do it anymore or aren’t able to put a dent into the balance owing. They want to avoid the stigma of filing for bankruptcy and would rather make a deal to the creditors.

The creditors have 45 days to vote to accept, reject or counteroffer. Not every creditor must accept the offer. Only the majority of creditors must accept. If accepted, an additional 15 day timeframe is required for Court approval which rarely happens. On some occasions, a meeting of creditors may be requested which could be held virtually. If accepted by the creditors and Court, it is binding on all unsecured creditors even if they voted against the proposal. If it doesn’t get accepted, your assets are not seized. You are simply back at the drawing board.

Once accepted, the payments are made to the LIT who administers the funds according to Federal law. You may borrow during the proposal, buy or sell assets and even pay off the proposal faster. Once all the terms are paid, a Certificate of Full Performance is issued and the credit bureaus are notified.

Equifax Canada and Trans Union of Canada reflect the filing of the proposal 3 years from completion. In other words, if you make a deal to make payments over the maximum 60 months (5 year term), the proposal will be reflected on your history for 8 years.

As everyone’s financial situation is varied, we suggest that you discuss your specific situation with a LIT who can provide their professional opinion as to what offer may be best for both you and the creditors.

The consumer proposal is a great alternative to obtaining a consolidation loan, or a debt management program that has no legal enforcement or a bankruptcy proceeding where you could lose assets. Feel good about paying some of the debt without interest and see the light at the end of the debt tunnel.